God answers my prayers—He does miracles!  For years I knew I needed to write down His awesome answers to prayer, because they would bring glory to Him.  My daughter suggested that I share them on a blog.  I didn’t even know what a blog was!  I was born in 1940—at home.  That farm home on the Minnesota prairie had no electricity and no indoor plumbing. I’m old–this is why I didn’t know what a blog was, and wouldn’t have known where to start.

Then God gave me this dream to show me that He would help me.  It was summer and I was driving a bus with passengers through hilly countryside.  The road was one lane only, no oncoming lane, and no passing lane.  The road curved left and then had a 90 degree turn to the right.  It was difficult to navigate the sharp turn, but I did it.

Once around the turn, I caught my breath at what was ahead.  The road went straight up a steep mountain which looked impossible to climb with this old bus.   I couldn’t go back, so I shifted into low and tried to make the bus go up that steep hill.  The bus went slower and slower and finally stopped.  It was too steep—I couldn’t do it!  I carefully backed down, because going forward was impossible.

Then a big truck came up behind me.  Since this was a one lane road, it couldn’t get past me.  I got out to tell the truck driver my dilemma.  He was friendly and told me to go ahead again, and he would help me get up the mountain.  I didn’t question how he would do that, because something about him gave me total peace, and I believed him!

The people in the bus were waiting, and as I turned to go back to the bus, suddenly, it was winter.  The truck driver and I were standing in 18 inches of snow on a curb, above the road.  I stepped down into what looked like snow, but under the snow was water. The water was too deep for me to walk, but, again, I had total peace because the truck driver was there!   I don’t know why there was a curb there or why suddenly it was winter, but this was the dream.

After I awoke, I realized the truck driver was God.  He was telling me that the hill was too steep for me, and the water was too deep for me, but that He would help me share His answers to prayer.  Where it is too difficult for me, He will do it.

The people on the bus represent people waiting to hear how to get their prayers answered.  But first, I needed to make that hard turn to the right.  I had to be willing to write it as a blog—one answer to prayer a week, and God promised to help me.

Shortly after the dream, I received an email invitation to join Tribe Writers. In an eight-week class I would learn to set up a website and do blogging.  Like the mountain that was too steep, and like the water too deep for me to walk, this seemed impossible!  But in the dream God had said to get started, and He would help me.  So, with God’s help I learned how to blog and publish.  Because of my age, the technology involved in setting up a website was beyond me, so I hired help to set up the website.  And GOD HELPED ME CLIMB THE IMPOSSIBLE MOUNTAIN!  The website is active and one of God’s answers to prayer is being published each week.

Here is how God started answering my prayers: In 1970, when I was 30 years old, I was married to an abusive alcoholic, and I had so many problems that I no longer wanted to live.  I asked God what to do, and I heard Him say, “Read your Bible.”  I was shocked that I heard His voice, and amazed that the answers to my problems would be in the Bible.  But they were!

When I read the story of Jesus, in the Bible, I realized God sent Him to be my Savior. Oh, how I needed a Savior!  I said, “Yes!” to Him with everything in me.  My sins were removed because Jesus had already paid for them on the cross, and God, who then saw me as sinless, drew near to me. He wants to be friends with all people. The key is to take Jesus as your Savior, and God will draw near! He has always wanted to be friends with us, and He immediately showers us with love.  He draws so close that He becomes a  friend.

As I read the Bible daily, I found promises God gives to all those who believe Him.  If God said it, I believed it, so when I pray, I remind God, “God you promised in Phil. 4:19 that You would meet all our needs, and this is a real need!”  God loves it when we read His Word, He is so pleased when we believe it, and it touches His heart when we remind Him, “God, You said. . “   In each answer to prayer, you will glimpse why God answered the prayer.

On FaceBook someone asked, “Has God ever answered a prayer for you?”  When I read that I realized there are people who don’t know how to get their prayers answered.  In response, I wrote “Ten Steps to Answered Prayer.”  You can get that short e-Book on this website. 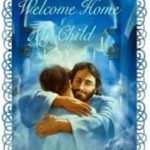